Experiencing crime can affect you in different ways, be it emotionally, physically, mentally or financially.

A Victim Personal Statement (VPS) gives you the opportunity to explain in your own words the impact that the crime has had on you and your family. It will be taken into account by all criminal justice agencies involved in the case and it can play a key part in sentencing.

More information can found below. Alternatively you can sign up for a free personalised account on My Support Space – an online resource containing interactive guides including information and tips on writing your Victim Personal Statement.

How a VPS works

All victims who report a crime are entitled to make a Victim Personal Statement at the same time as giving a witness statement to the police. The VPS allows you to say how you and your family have been affected by the crime. This is different to a witness statement, which describes what happened at the time of the crime. Giving a VPS is optional and it will include your routine personal details such as name, date of birth and address.

Once you’ve completed a VPS you cannot change it, but you can give a further VPS at any time before sentencing. This will add to or clarify your initial VPS, and gives you the chance to describe any further impact the crime has had.

If you’re a victim of a serious crime (including bereaved close relatives), persistently targeted, or vulnerable or intimidated, you are entitled to make a VPS to the police at any time before sentencing, whether or not you make a witness statement about what happened.

The VPS will form part of the prosecution case but will only be considered by the court once the offender has been found guilty of the offence.

Take a look at our infographic, which shows how a Victim Personal Statement works and how it can play a part in sentencing: 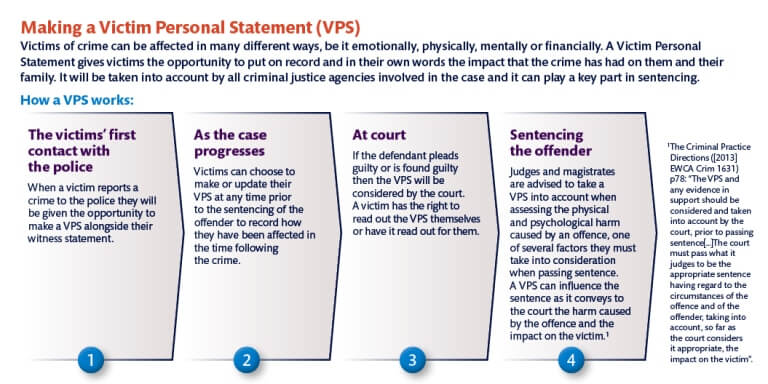 What happens with a VPS in court?

At the sentencing hearing the VPS may be read out loud to the court in full or in part. Under the Victims’ Code, you have the right to read your VPS aloud yourself or have someone else read it for you, as long as the court agrees to this.

The VPS won’t affect the nature of the sentence on its own, but it will help the judge to make a better informed decision on sentencing by taking into account the overall effect that the crime has had on the victim. Therefore, the VPS plays an important role in the court proceedings.

Who can take a VPS?

Victim Personal Statements are usually taken by the police, but the Victims’ Code also  allows for the VPS to be taken by “an organisation offering victim support services or another service provider” if arranged by the police.

The Parole Board is the independent organisation that considers whether certain offenders can be released from prison or moved to an open prison. When considering this, certain victims will be able to write a VPS telling the Parole Board what impact releasing the offender or changing their custodial conditions will have on them.

Victim Personal Statements can help the Parole Board to set appropriate licence conditions for the offender upon release, such as exclusion zones and preventing the offender from contacting the victim.

The opportunity to make a VPS for the Parole Board will be given to all victims who have opted in to the Victim Contact Scheme, which is available for victims of violent or sexual offences where the offender is sentenced to 12 months or more in prison.