After you have answered all the questions, your job is finished. The judge or magistrates will thank you for being a witness and tell you that you can go.

This content has been written for children and young people. If you’re looking for information for over 18s, visit our Going to Court information.

You have done a really important thing and without witnesses like you, courts wouldn’t be able to work.

So what happens next? 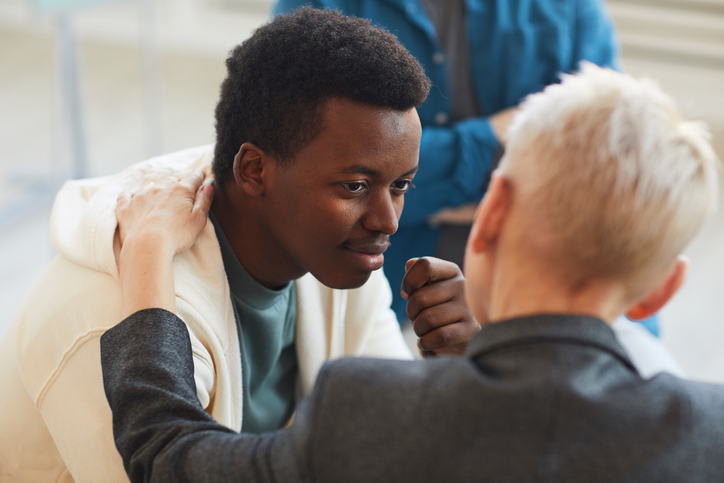 What will happen in the trial once I've given my evidence?

After you leave the courtroom, you will be able to go back to the waiting room with your witness supporter, and rejoin your family, or any other people who may be supporting you at court.

You job is now finished, and you can leave the court. If other members of your family are witnesses in the case, remember that you can’t discuss what was said in court until they have given their evidence too.

If there aren’t many witnesses in the case, or if you are one of the last witnesses, then the court may reach a verdict quite soon after you’ve given evidence. However, if there are a lot of witnesses, or it is a very complicated trial, it may take several days or even weeks before all the evidence has been heard, and a verdict can be reached.

In a magistrates’ court or youth court, this means that when the magistrates have listened to everyone, they go out of the court to a private room. They talk together and decide whether or not the defendant is guilty.

In the Crown Court, it is the jury that decides whether or not the defendant broke the law. When all the evidence has been heard, the members of the jury leave the courtroom. They talk about what they have heard and come to a decision.

Guilty or not guilty - what does the verdict mean?

If the sentencing is going to take place on another day, the defendant may be free to leave the court, although there will probably be bail conditions which tell the defendant that they mustn’t go to certain places, or speak to particular people.

If the magistrates or jury can’t be completely sure that the defendant broke the law, they will also have to say the defendant is not guilty. This is because it’s wrong to punish someone unless it is absolutely clear he or she is guilty.

It’s important to remember that if the court decides the defendant is not guilty, it doesn’t mean that they did not believe you. Perhaps they could not be absolutely sure of what happened. Or perhaps they agree that the defendant did something wrong, but they weren’t sure they actually committed the crime they have been charged with.

Our justice system relies on witnesses like you to come to court and tell the truth about what happened. But remember, each witness is only part of the system. When you are a witness, you are not responsible for what the court decides.

A newspaper may report the court’s decision but cannot mention your name.

If you want to know what was decided at the end of the trial, ask your witness supporter to help you contact the person who can explain the verdict and the sentencing in more detail.

What happens after the verdict?

If the defendant has been found guilty, they will be sentenced – which means they will be given a punishment for the crime they have committed. The sentence they receive will depend on the crime, as there are guidelines about how people can be punished for what they have done wrong. The judge or magistrate will have to consider the type of crime the defendant committed, how serious it was, their age, and whether they have broken the law before.

After the defendant has been found guilty, but before the sentence is announced, the court will also hear the Victim Personal Statement (VPS). This describes how the crime has affected the victim, whether that is emotionally, physically, mentally or in any other way. If you are the victim of the crime, you will probably have been asked if you want to make a VPS before the case came to court. It’s a chance for you to tell the court exactly how the crime made you feel, and how it has affected your life. If you want to, you can ask to read your VPS out in court – but you don’t have to. Talk to your witness supporter about the VPS.

The sentence can range from a conditional discharge – which means that the offender is free to go, but if they reoffend they will have to go back to court and will receive a bigger punishment – to a fine, a community order, or a custodial sentence (which may be suspended).

What is an appeal?

If the defendant is found guilty, they might ask for another chance to prove that they are not. This is called an appeal. Appeals can only usually happen if the defendant’s lawyers can show that the rules weren’t followed in court, or if there is new evidence. If the defendant wants to appeal against the verdict, they have to start their appeal within 28 days of the verdict being announced, although it can take quite a while for the appeal hearing to come to court. In some cases when there is an appeal, witnesses have to go to court again, but it’s very rare.

The defendant may also appeal against their sentence, if they feel the punishment was too much, but witnesses would not be involved in this appeal.

They should have been punished more - what can I do?

Although judges and magistrates have to follow guidelines when deciding what sentence they should give, sometimes victims feel that the sentence is unreasonably low, and that punishment for the crime should have been greater.

If you think the punishment for the offender in your case should have been more, talk to your witness supporter who will help you talk to the prosecutor. They will be able to explain to you how the sentence was decided, what the judge or magistrates had to consider, and whether the sentence in the case could be reviewed (only the sentences in certain types of crimes can be reviewed).

Anyone can ask for a sentence to be looked at again – they don’t have to be involved in the case – and only one person needs to ask for a sentence to be reviewed. But the time limit for making a complaint about a sentence is 28 days after it was announced, so talk to your witness supporter or anyone else who has supported you through the case as soon after the sentencing as possible, and let them know what you think.

The case is over - what happens now?

Even though you’ve given evidence, and the trial is over, the experience may still be upsetting. Whether the offender was found guilty and punished, or the defendant was found not guilty, being a victim of crime or a witness can have a big effect on you. So it’s important to remember that you are not alone, that you haven’t done anything wrong, and that there are people who can help you.

Most of us feel overwhelmed or like we can’t cope with things at least once in our lives – many people feel like that a lot more frequently. At times like this you need to be able to talk to someone, so don’t be afraid to ask for help. Talk to your witness supporter about how you feel, and what worries you may have. They will be able to find you more help after the trial, and both Victim Support and the Witness Service will carry on supporting you after you have been to court.

Having to go to court may have had an effect on your health, on your school work, and on your relationships with friends and family. Your witness supporter will be able to suggest ways you can deal with these issues, and also contact people you can talk to, to give you more support, including counselling.

It can be difficult, but it’s important to remember that life can be positive again.

I've been asked about restorative justice - what is it?

You may have been asked if you would like to take part in restorative justice (RJ). This is a way of trying to deal with the harm done by crime, by making things good again for the victim and the community, and to help the offender face up to what they have done.

Your witness supporter can explain more about how RJ works. Some young victims find RJ really helpful in moving on from a crime, but it’s not the same for everyone, and if you don’t want to take part, that’s fine too.

What happens when the offender is released?

If the offender in your case has been given a prison sentence and you’re worried about when they will be released, talk to your witness supporter. In some cases, if you are the victim of the crime, you will be told if the offender is due to be released. You can always ask for help from Victim Support, or other young victims’ services, at any time in the future if you become worried or need help again.