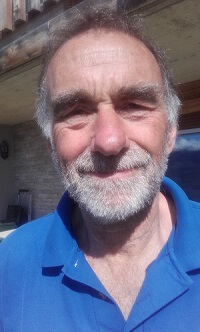 Steve has volunteered with Victim Support’s Restorative Justice team in Sussex for over five years and told us more about his role.

After I retired I decided to go back to university and study philosophy. One of the aspects that particularly interested me was justice and this led me to volunteer with Victim Support’s restorative justice team and I’ve been volunteering here for over five years now.

Restorative justice (RJ) in essence, is about connecting the person who has been harmed with the perpetrator and helping them find some kind of resolution. This is often to get answers to questions that weren’t addressed in court and help them move on with their lives.

Victims who have been through the RJ process often say they feel that a great weight has been lifted off their shoulders and for offenders RJ can act as a springboard for developing greater self awareness and a new set of values.

Often my cases come through the Victim Support case workers, when a victim expresses that they want to meet with the person who has caused them harm. I then get sent the details and scope the case by looking at all the background in conjunction with a co-facilitator. It often works well to be teamed up with someone with a different background – it could be a police officer or someone from another organisation in the RJ Partnership, as our different experiences and skills means we can look at the case more thoroughly from a number of perspectives. From there we will then meet the person who has initiated the RJ process – generally this will be the victim but sometimes it is the offender.

One of the most important things to do first  when you meet the victim is to explore their motivation for taking part and their emotional needs. We are always looking to ensure there is no risk of re-victimising the person who has been hurt and make sure they are resilient enough to cope with the practical aspects of RJ at this stage in their recovery.

There is a lot of preparation that goes into preparing for an RJ conference, when victim and offender meet face to face, and it can take many months to prepare the case. We will meet with the victim as many times as they need, both before and after the conference has taken place to ensure their safety and wellbeing– there are no time constraints on how long this can take.

We often ask the victim to write down what they would like to tell the offender about the harm they caused, and to list the questions they would like to ask. We might then ask them to write that as a letter that can be taken to the perpetrator.  At this stage we can assess the their capacity to take part in a face to face interview if that’s what they still want.

We speak to both the victim and the offender about their versions of what happened.  We listen carefully for inconsistencies as one thing that’s crucial is that there must be consistency of stories so the two parties don’t get into a debate about the facts. We need to be confident in how they will react when they meet to reduce the risk.

RJ is a very powerful process and the conferences are invariably emotionally charged. People bottle up a lot of anger and resentment after suffering harm as the result of a crime. The victims generally gain a lot a lot from participating in a conference, primarily a greater peace of mind and feeling able, at last, to be able to get on with their lives.

Offenders expressing remorse is very important for the victims. In some cases offenders agree to do something tangible in order to mitigate the feelings of harm caused to the victim, who can then feel that just some good has emerged from a sad tale. For example, I worked with one offender who agreed to do a video for a road safety campaign on dangers of reckless driving.

But RJ can be a frustrating role at times. The criminal justice system is complex and sometimes it can be quite tricky to track down the perpetrator. And it can can be hugely upsetting for the victim when the offender doesn’t want to cooperate. So we have to manage victims’ expectations carefully.

I deal with all sorts of crimes from causing death by dangerous driving, through all sorts of abuse including domestic abuse, whilst other crimes such as burglary are very common. In burglary cases many victims want to know why the offender picked them and if they plan to come back. I had one case where the victims’ house was burgled while they slept and they wanted to ask what would have happened had they woken up – the man who had burgled them said he would have just run away. You can see how that could give them a sense of relief.

I had one case where a woman met with the man who had killed her sister. She wanted to tell him all about her sister and the man said he had often thought about her and what she was like, so this was very powerful for them both.

One offender I have worked with met with the woman whose partner he had killed through dangerous driving. She said to him that she forgave him because she knew it was not his intention to kill her partner. He was stunned by her forgiveness and told me he found it very difficult to accept when he couldn’t even forgive himself. But he went on to say that he planned to keep her forgiveness in ‘a sort of deposit account’ which he would draw from in difficult times during the rest of his life.

On another occasion the victim called me just after she had left the conference to ask if she could come back in. She came back and she hugged the perpetrator, and told him he ‘wasn’t such a bad bloke after all’, which as hugely moving for everyone.

I get a huge sense of satisfaction and relief when we complete a successful meeting –which in my opinion is a meeting of minds between two people which results in victim feeling unburdened and able to get on with their life.

To anyone thinking about taking up a volunteer role in restorative justice I would say come and meet us and find out more about what the role is like, and the satisfaction we get from doing this work!

I think the biggest lesson I’ve learnt is that no-one is all bad and we need to find the good in people, whether they are victims or offenders, and enable them to experience the benefits of connecting as human being.”

Could you consider volunteering for us? We always need new volunteers to join our local teams so please view our current opportunities — we’d love to hear from you!